Derbyshire Healthcare NHS Foundation Trust is run by a Board of Directors made up of Executive and Non-Executive Directors. The Trust Board of Directors has a responsibility to make the best use of financial resources and deliver the services people need, to standards of safety and quality which are agreed nationally.

Ifti qualified as a Registered Mental Health Nurse in 1988, training at St George’s Hospital in London. He has held a range of clinical posts in adult mental health services, both in acute inpatient and community settings.

Ifti has worked for the Trust and its predecessor organisations for many years in a number of roles, starting as a Community Mental Health Team Clinical Lead in 1997. Ifti also completed post-graduate management studies at Sheffield Hallam University with a particular interest in business process redesign.

Ifti is also the Board’s BME champion. In 2019/20 Ifti was also appointed as co-chair of the National NHS BME Leaders Network, hosted by NHS Confederation. In October 2020, Ifti was named one of the 50 most influential BAME people in health in the UK.

Claire has a BA (joint hons) from Keele University and worked in the private sector before joining the NHS Graduate Training Scheme in 1995. She has been a fully qualified Management Accountant since 1999.

During the last 18 years in the NHS Claire has relished working in both Acute and Mental Health provider organisations mainly in finance but also in wider management roles.

John Sykes was born in Manchester in 1958. He qualified at Sheffield University Medical School in 1981 and became a Member of the Royal College of Psychiatrists in 1985.

From 1986 onwards he was Lecturer in Psychiatry at Sheffield University where areas of special interest included the Psychological Effects of Spinal Cord Injury, Cognitive Psychotherapy and Systems of Psychiatric Classification. He was appointed Consultant in Old Age Psychiatry in 1989.

Ade joins us from Central and North West London NHS Foundation Trust, where he is currently the Managing Director of one of the Trust’s three divisions. Ade leads a large service providing mental health, learning disability and perinatal services across a number of London Boroughs.

Ade was also formerly the Associate Director of Operations for Coventry and Warwickshire Partnership NHS Trust. He has a wealth of operational experience across the NHS and within private healthcare.

A Registered Mental Nurse by background, Ade has worked on acute inpatient wards, in community liaison teams, within a Young Offenders Institution and is a trained therapist.

He says, “I am highly motivated to deliver clear outcomes and results for patients and staff. I work to make a positive difference for those who use mental health, learning disability and children’s services and for the people who work within our teams. I am looking forward to returning to the Midlands and becoming a member of Team Derbyshire Healthcare.”

Carolyn has worked as a qualified mental health nurse since 1995.

Working in the west and south of London, she spent the majority of her nursing career working in inpatient care.

Throughout her career, Carolyn has taken a family-orientated approach to service design in her early intervention in psychosis, adult mental health and CAMHS roles.

She has a Masters in Health Service Management and has been a Senior Lecturer and a Visiting Fellow.

Carolyn is committed to personalised care recovery principles and seeks to involve people with lived experiences of mental health services in service evaluation, education and quality improvement programmes. She has always embraced technology and innovation and has designed many technical solutions to clinical practice challenges over her NHS career.

Carolyn relocated to Derbyshire to become the Trust’s Director of Nursing and Patient Experience in 2014. 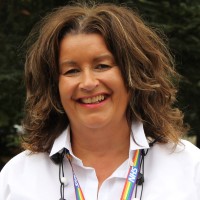 Jaki joined the Trust as Director of People and Inclusion on 17 August 2020. Jaki came to the Trust from a role as People Director for Shropshire Community Health NHS Trust. Jaki was seconded through the NHS Executive Talent Scheme to Shropshire from her role as Deputy Director of OD in Sheffield Teaching Hospitals NHS Foundation Trust, and has prior experience inside and outside the NHS at Director level including at United Lincolnshire Hospitals NHS Trust.

Jaki, who lives in Nottinghamshire, spent her childhood in Derbyshire and then trained as a nurse in Derby, before moving into roles in occupational health, training and human resources.

She spent a number of years in Cycling UK, latterly as Vice Chair, and is particularly proud of the work the group did in raising the profile of women in cycling and supporting programmes for inclusive cycling.

Jaki has a keen and active interest in inclusion both within and outside the professional role, and aims to build on the work the Trust has already achieved in this area, supporting the Board’s goal of making the Trust a great place for people to work, thrive and give great care.

Gareth began in post as the Trust’s Director of Business Improvement and Transformation on 1 June 2018. Gareth joined the Trust from his role as Interim Director of Contracting and Performance for the Derbyshire Clinical Commissioning Groups (CCGs) and Executive Lead for Hardwick CCG.

A resident of Derbyshire, Gareth has also previously held posts within NHS England and NHS East Midlands.  Gareth is familiar with the Trust’s services, funding and challenges through his role at Hardwick CCG, the lead commissioners for mental health services.

Justine Fitzjohn joined us as Trust Secretary in June 2019.

Justine joined the Trust from University Hospitals of Derby & Burton (UHDB) NHS Foundation Trust, where she was the Deputy Director of Governance. She brings a broad range of experience in regulation, statutory and legal compliance.

Justine's responsibilities include arrangements for the Trust Board, Board Committees and Council of Governors, alongside membership, legal affairs and Freedom of Information.

Selina had been a Non-Executive Director at Bradford Teaching Hospitals NHS Foundation Trust for six years and became its Vice Chair and Senior Independent Director in 2019.  Selina’s appointment was approved by the Trust’s Council of Governors in its meeting on 6 July 2021.

Selina is a Board member for the Muslim Women’s Council, having previously been its Chair for 10 years. She is also a Lay Board Member at the General Pharmaceutical Council.

Richard Wright, chair of Sheffield College and executive director at Sheffield Chamber of Commerce, was appointed as a Non-Executive Director for Derbyshire Healthcare NHS Foundation Trust on 18 November 2016. He was appointed Deputy Chair on 6 August 2019.

Richard, who lives in Nottinghamshire, is committed to working with organisations that can have a significant impact on his local population and he is particularly interested in exploring the opportunities and challenges the Trust has to tackle.

Richard was reappointed for a second three-year term of office until 17 November 2022.

Margaret Gildea was appointed as Non-Executive Director on 7 September 2016.

Margaret brings a significant level of experience to the boardroom in terms of employee engagement and culture change. Margaret is a practised HR professional with 30 years’ experience in increasingly senior roles at Rolls-Royce, culminating in being the company director of learning and development and divisional executive vice president of HR.

Since 2009 Margaret has worked as a freelance HR consultant specialising in areas such as strategy development, leadership and organisation design. She has coupled this with other Board appointments and is currently a non-executive director for Derwent Living.

On 1 January 2017, Margaret became the Trust's Senior Independent Director (SID). Margaret serves as a sounding board for the Trust Chair and an intermediary for the other Directors if necessary. The SID is also available to governors if they have concerns that contact through the normal channels of Trust Chair, Chief Executive Finance Director or Trust Secretary has failed to resolve or for when such contact is inappropriate.

Until 31 August 2019 Margaret was the Non-Executive Director Freedom to Speak Up lead.

Margaret has previously chaired the Trust’s People and Culture Committee.

Margaret was reappointed for a second three-year term of office until 6 September 2022.

A qualified accountant by background, Geoff has a particular responsibility to chair the Trust’s Audit and Risk Committee. He joins colleagues on the Board of Directors in ensuring the organisation provides effective and high quality healthcare services to the local community, is governed properly and that patient interests are fully represented.

Geoff has over 30 years’ experience in finance, IT and governance, having recently worked as Director of Financial Strategy for Rolls Royce. He is also a Trustee of The Arkwright Society, an educational charity devoted to the rescue of industrial heritage buildings in Derbyshire.

Geoff was re-appointed for a second three year term until 30 November 2023.

Dr Sheila Newport took up her role as a Non-Executive Director on 11 January 2020.

Sheila has 18 years’ commissioning experience, including her work with Southern Derbyshire CCG from 2011 – 2016, as well as work with organisations that led to the formation of SDCCG.

Now retired, Sheila was an experienced GP for 29 years, serving as principal of her practice, and is also experienced as a Board member.

She has chaired multi-agency boards through Derby City Health and Wellbeing Board and Southern Derbyshire Integrated Care Board as well as gaining further board experience as Associate Non-Executive Director on the board of Nottingham University Hospitals Trust since she retired in August 2017.

Ashiedu Joel joined us as a Non-executive Director on 23 January 2020. She is an engineering graduate who runs her own business consultancy and training firm across the East Midlands. She has recently been participating in the NExT Director Programme with Leicestershire Partnership Trust and is also a Justice of the Peace.

Ashiedu is an elected member of Leicester City Council and has experience of supporting organisations, groups and individuals to engage constructively across racial, cultural and socio-environmental boundaries, while promoting opportunities for shared learning and collaboration.

Ashiedu has also held a number of Non-Executive posts and continues to be Executive of Clarion Voice, a charity working with young disadvantaged African heritage children through education, and a Trustee of The Bridge, which provides sustainable housing support, advice and solutions for homeless and vulnerable people in Loughborough and Leicester.

Deborah, a former Housing Director, holds a BA and a Postgraduate Diploma in Housing.  She has spent most of her career in the social housing sector, working to improve the quality of services for local communities.

Deborah has experience of serving on various multi-agency boards, including in her role as Executive Director of Customer Experience and Business Support at Solihull Community Housing and as Non-Executive Director at Derwent Living.

Deborah lives in Derbyshire and is a current Trustee of Artcore, a provider of visual arts to diverse communities across Derbyshire.

In her role as Non-Executive Director, Deborah will be a member of the Finance and Performance Committee, overseeing all aspects of financial management and operational performance. She will also sit on the Audit and Risk Committee, which ensures that the Trust has an effective system of integrated governance, risk management and internal control.

Deborah has been appointed for a three-year term of office, ending in March 2025.

Derbyshire Healthcare has supported the NExT Director scheme for a number of years.  The national scheme, led by NHS England and Improvement, aims to increase the diversity of Board members across the NHS.

Although NExT Directors are not members of the Board, they participate in Board and Committee meetings across the Trust, in addition to a wider range of other activities including service visits.

Jas Khatkar is the Trust’s current NExT Director.  Jas joined the Trust on 4 April 2022 and has been appointed as NExT Director for a 12 month period.

A Chartered Accountant by background, Jas is an experienced management consultant who specialises in finance transformation and business strategy. A former director with Accenture, Jas has worked multiple industries, including telecoms, utilities and pharmaceuticals.

The Trust's Management Structure is available to download here.